Guidance fading: how I do it

I’ve written before about a simplified model to summarise the cognitive load that a student feels during a particular task:

If you are unfamiliar with the model, please read about it first as it will help you a lot in this post, which will focus on how the variables change whilst a student is practising and how teachers must ensure that independent practice is a dynamic process that responds to students’ increasing knowledge and skill.

At the beginning of a task based on new material, students’ internal resources are, by definition, very low. They don’t know much about what you are teaching them, so you have to compensate either by providing them with external resources or by breaking the task up into smaller chunks (what I call quantity in the model above).

I’m going to combine those two factors together simply as “support”:

This helps to maintain a good level of “desirable difficulty” – not too hard, not too easy. Perfect for effective thought and – hopefully – learning.

However, as time goes on, students’ internal resources start to increase as they begin to learn the content. At this point your students are in danger of finding the task a bit too easy. If there are no difficulties involved, then learning is less likely to occur. Your best choice here then is to start reducing the amount of support:

As time goes on, you’ll need to keep following that process in order to maintain your optimum level of difficulty: 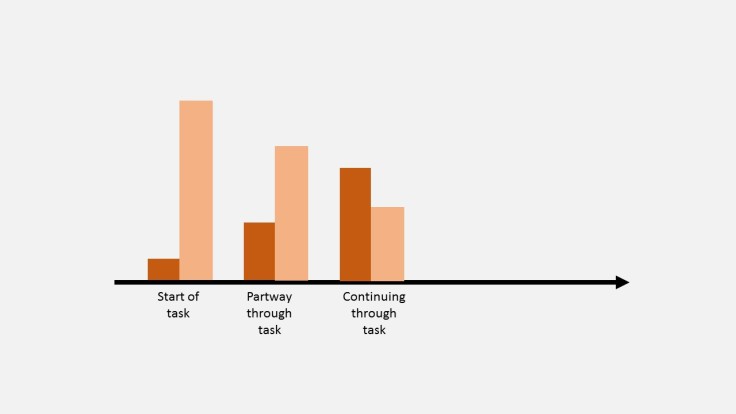 The way you reduce support during a task is called guidance fading. There are many, many different ways to do this, and for more information and reading I suggest the free CPD module on designing practice here or read Sarah Cullen’s excellent chapter on the topic here. In this post, I want to look at a really simple route for doing this that relies on you having a crystal clear image of what you want your students to be able to do.

The route broadly follows these steps:

Ok, I didn’t follow that. Can I have an example?

I have a couple of examples of where I’ve tried this below. I’ve no idea what it would look like in a non-science context, and would be really interested in seeing some examples if you’d like to share..

My first example demands more in the Question than students might expect in an exam, but it should serve to prepare them for any eventuality, as well as tying together quite a lot of material. It comes just after students have been taught about giant ionic lattices: 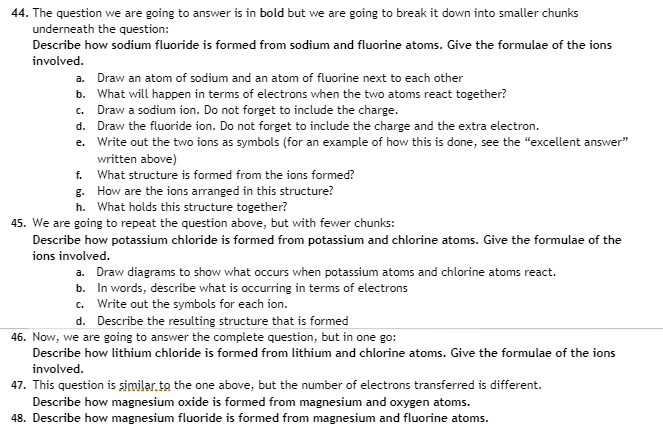 Some of the nuance may be lost on non-science teachers, but I hope you can see how the questions only vary very slightly, and between questions 44 to 46 the supports fall away. Question 47 introduces a bit more variation from the previous ones, and so is more difficult. Correspondingly, this question needs to have a bit more support in the form of a prompt about the number of electrons.

The next problem set is a bit longer, and deals with one of the most complex operations in the chemistry part of the science course. Before starting the problems, students do some worked examples with the teacher followed by being provided with a simple step-by-step. As you can see, the problem set then deals with just one equation, sticking with the principle of only introducing small variations at a time. The supports slowly fade away and after question e there are a bunch more problems, none of which have supports provided, other than a rough answer range.

To conclude then, the idea is that student practice has to be thought of as a dynamic process. Yes, it has to be extensive. There have to be lots of questions. But perhaps more important is the sequencing of those questions throughout the set and how the author has thought about maintaining a level of desirable difficulty.

13 thoughts on “Guidance fading: how I do it”