What’s a visualiser worth? 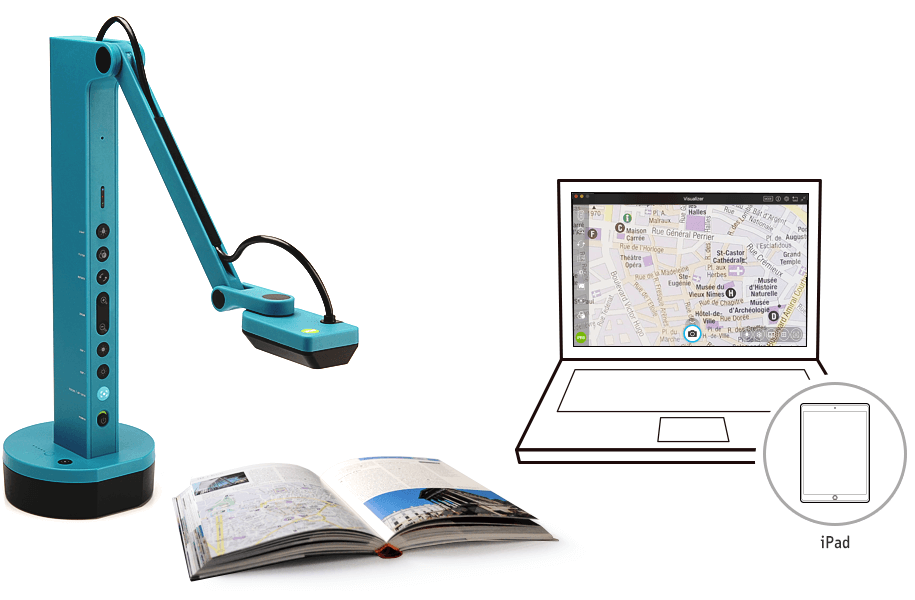 A few weeks ago, IPEVO contacted me to ask me if I would like to review their newest visualiser: the wireless VZX. They didn’t ask me to publish a blog or anything, just to give them some feedback on the model and whether it would be useful for teachers. I’m writing the review here because it might be useful to people but I’ve tried to make it a bit of a hybrid: part review, part useful tips and tricks for using a visualiser. More and more people seem to be using them so I hope the below is useful.

First, a reminder: why use a visualiser?

Many teachers by now have some idea of “dual coding” as well the importance of clarity during explanations. Definitions I tend to use are:

Multimedia effect: the learning benefit from being presented with information both verbally and visually

Dual coding: the working memory’s ability to “expand” when dealing with verbal and visual information (i.e. the mechanism by which the multimedia effect arises)

Redundancy: a learning impediment caused by redundant information (e.g. someone reading off their powerpoint slides)

Split attention: a learning impediment caused by you having to split your attention between two or more things

I’ve written a lot about how I take advantage of the multimedia effect and try to minimise redundancy and split attention, but in short the process of starting with a blank slate and slowly building an image allows me to be in complete control of the flow of information, dictating at every point what my students should be attending to. To do this, I use a mini-whiteboard under a visualiser with a black Edding 361 pen. I use a visualiser instead of the main board because:

I use that particular pen and a MWB because:

I know this sounds prosaic, but it’s pretty important due to longevity issues. You can’t justify shelling out unless it will last. The build quality of the VZX feels very high. It feels robust and well put together and doesn’t have any dodgy levers or arms or springs or cheap-plastic-feel about it. Obviously I can’t tell how long it will last for, but compared to the others does very well. V3 for example is a similar price bracket but my one was very stiff getting the lever arm up and down and it felt very tired. V2’s feel very cheap and plastic-y as well. The V4K has a similar feel to it, but it’s much lighter and feels a bit more flimsy.

The VZX by miles gives the best clarity out of the visualisers I’ve used. I don’t know why that is in terms of megapixels and resolution and frame rates and the like, but it’s the best. It’s also very smooth with faster motion so I can move my hand under it and point without it looking jittery or blurred.

Teaching and learning tip here: cameras have two focus modes; continuous and fixed. Continuous means that if it is focused on the MWB, and I put an object closer to the camera (i.e. higher up) it will change its focus onto the new object. The VZX does this very well and seemlessly, but it’s also annoying as for teaching fixed focus is best. You don’t want to write on your MWB and find that your camera is focusing on your knuckles or the back end of the pen. You can change it from continuous to fixed, but it’s a bit of a pain as you need to hold a button until it beeps, and there is no obvious way to know which mode its on. The 4K by contrast has a switch that you can change on the camera and see really easily which setting it is on. Neither of the other ones I used could change modes.

The V4K has no zoom on the camera, which means you either have to do it through the app (a faf) or by raising and lowering the arm the camera is on (a faf). The VZX has a massive arm which moves really easily up and down, and because there is only one joint in it it’s really easy to get it quickly to the right position. It also has a digital zoom that goes in really close. This is useful if you want to zoom in on a worksheet or whatever that has small font.

One of the coolest perks of the VZX is that it has a microphone. This is cool because it means I can video everything I’m doing under the visualiser and just save it straight into my drive. Honestly, I don’t know why all visualisers don’t have microphones, but they don’t (the V4K does). So far I have used the video for:

It’s so easy. You just press the button while you are teaching and presto – you’ve got a record that could make a big difference to your students or your colleagues or to the next time you explain it.

The main selling point of the VZX is that you can use it wirelessly. It can connect to your PC via wifi and you can wander around the class with it, pop it on a student’s desk and beam their answer straight up onto the board. No faf. Brilliant. Genuinely. I used it today and I had a student teacher in the room who remarked on how the students both wanted and didn’t want me to pick their work. It’s a great way to build ratio – if every student knows their work could be displayed they will put more effort in (hopefully). Provisos obviously apply, and if you have a student with anxiety maybe don’t pick them.

The flip side of course is connectivity. My PC doesn’t actually have wifi so we had to get a dongle for it. You can pick them up for a tenner, but it’s still an added expense and a classic example of edtech not integrating with existing school tech. If you have newer PCs or a laptop this shouldn’t be a problem for you.

Battery is also an issue. I haven’t used it enough to be sure, but it looked like I would probably get a couple of hour’s worth of battery life out of it. According to the spec sheet it should last 9-12 hours but I think that’s optimistic. I’m not sure you’d ever really want to use it wirelessly for that long anyway, it’s really only for reviewing students’ work which is rarely your whole lesson but it is a consideration.

It can also be a bit fiddly swapping between the wifi and non-wifi mode but I haven’t really played with that too much yet so it could be there’s a simpler solution.

Overall, I think the wireless thing is great, and it opens a lot of possibilities in the classroom if you’re game for it.

The VZX is a great bit of kit and I’m a bit in love with it. There’s a couple of things I’d change, but overall it’s excellent. Using visualisers generally has without a doubt made me a better teacher, and if you have staff who really want to focus on their modelling and exposition then they need a visualiser in their classroom. Does it need to be this visualiser? Is £250 too much to spend? Depends. Schools spent a hell of a lot of money on interactive whiteboards, and I’m not sure that £250 is too much to spend on something if a teacher is going to use it every lesson. If someone was asking me for a recommendation, I’d happily recommend the VZX.

This is interesting. I do think the idea of asking SLT for £300 for a visualiser is out of the question for many. But. It’s not that long ago since schools popped a £4K interactive whiteboards in each classroom… https://t.co/JAMc31g0i3

Feel free to be in touch if you have any questions!

4 thoughts on “What’s a visualiser worth?”