I was just settling in for a well-earned evening playing video games on my laptop when I saw this thread by Ben Ranson:

1/ A short thread on sequencing, schema, retrieval practice, and how we plan on teaching the global atmospheric circulatory model in our Year 8 curriculum. #geographyteacher

The reason why Ben’s thread is important is because it models curricular thinking. Most of us (including myself) are not trained to think deeply about curriculum, and in this bright new era of curriculum, curriculum, curriculum, we need models – like the one Ben has provided – to stimulate our own thinking and provoke us to re-evaluate the what, why and how of our subject. The more models we have, the greater chance that this new era indeed shines bright as schools and leaders take ownership of their curriculum instead of outsourcing their thinking to consultants, or drowning it in endless generic bureaucracy.

I therefore wanted to share some of our thinking too. I’ve written a lot about our new Key Stage 3 curriculum, but what I want to do here is give one example of how we have thought about the actual disciplinary substance of our curriculum and how we have thought about the sequencing of core concepts. Throughout I will try to use terms from Ruth’s blog on the language of curriculum, which I recommend you read, and will signal by bolding the term.

The problem: where to start?

Where do you start with year 7? You know you want to teach them biology, chemistry and physics, but which comes first? And which topics from within those broader disciplines do you introduce first?

The easy one: chemistry

Chemistry is probably the easiest to figure out what to start with. That’s because even though chemistry can branch off pretty rapidly into horizontal areas, everything in chemistry stems vertically from a set of fundamental principles: atoms, elements, compounds, molecules, conservation of mass and equations. Without that, you can’t study anything in chemistry. So even though you could certainly study rates of reaction without studying fractional distillation, you would be hard pressed to study any of those without those fundamentals. 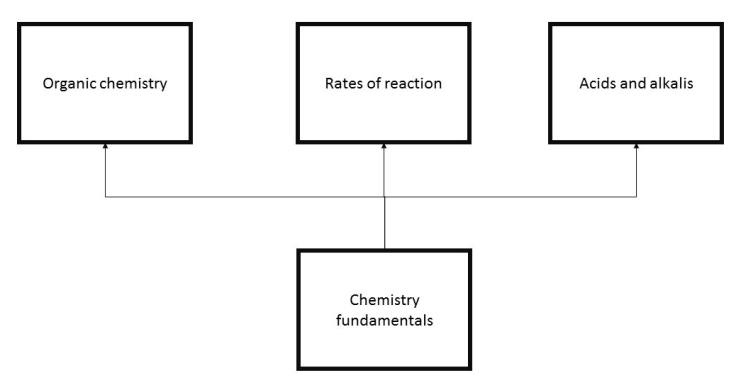 Theoretically, you can teach rates of reaction, organic chemistry and acids/alkalis independently of each other. You wouldn’t actually do this, but you could. But you can’t do any of them before students have the fundamentals pat.

Actually figuring out what to include was the tough part, as many standard textbooks and schemes of work use confusing and self referential definitions like:

Atom: the smallest part of an element that can exist

Element: a substance made of one type of atom

Which doesn’t really help anyone. You can see how we have built our unit in its entirety here.

Biology tends to be a bit less structured like that. Topics obviously do relate to each other, like interdependence and adaptation, but there isn’t really a central pillar that everything rests on: the fundamentals of chemistry can be thought of as the basic grammar of the subject – the way that scientists talk about chemistry is through that language – but biology doesn’t quite have the same thing. We decided to go with cells for a few reasons:

The downside is the sheer amount of content in the topic. In order to do it properly, we wanted students to study five specialised cells in detail as well as an entire organ system and how a microscope works. That represents quite a lot of material, so we didn’t really want it to be the first unit year 7 studied: we wanted to get them into good habits of memory like regular retrieval practice before throwing an enormous amount of declarative knowledge at them.

Physics is even harder to figure out, because even though the topics link to a massive extent, there has to have been some serious epistemic ascent before the pieces really start to come together. This is partly because physicists understand the world through many different lenses and perspectives, depending on the problem at hand. If even undergraduate physicists can struggle to untangle and properly assimilate topics like forces and energy we need to be very careful about how we sequence the knowledge. Probably the most common plank between topics in physics is mathematisation and the use of formulae, with another contender being the concept of using abstract models to understand the world.

We decided to go with energy stores and transfers first. The reason for this is:

We built the unit to cover the stores and transfers model fully and lead up to a few exemplars: the coal power plant, wind turbines and hydroelectric. And we drilled the stores and transfers so well, that by the time we got to the power plants it wasn’t a confusing mess like they normally are when you teach them, but a really straightforward application of knowledge students were already fluent in.

We also didn’t want this physics unit to come first. We felt it would be a really tough unit for the students and teachers should be at the point with their classes where they know them well and are more adept at supporting them through it.

So which comes first?

Following the logic above, we have chemistry fundamentals first, and then either cells or energy stores. We decided to do stores first, based on the following logic:

An added bonus of doing chemistry then physics was that when we got to the coal power plant, we could talk about combustion properly. We could do proper equations and show students how the chemistry finds itself in the physics. We could then build up to respiration and photosynthesis in the same light: reactions that are either analagous or the complete reverse. This would be crucial for our students’ schema development and understanding of the links between the topics.

This leaves us with a sequence that looks like this:

That’s it for now. Would love to hear your thoughts, and would especially love to see other models like this across the subjects.