A while back I’d just finished a unit in a double lesson with my year 11s. We had about 15 minutes to go so I let them do some free revision, either making sure they had answered all questions set or get on with some retrieval practice on Quizlet. Almost all of them took it seriously, other than Danny. Danny was a Disengaged Boy. He couldn’t care less about his GCSEs and was utterly uninterested by the whole process. I had been told not to get into confrontations with him, but I could try and engage him by using baseball. Apparently he loved baseball.

As usual, Danny just put his head on the desk. How I dealt with that throughout the year will have to wait for another blog, today is about something else. Danny zoned out of the lesson completely, until he heard a small commotion in the row behind him. One of his male peers had discovered the “match” activity, where you are timed in matching terms with definitions (or in this case questions with answers). 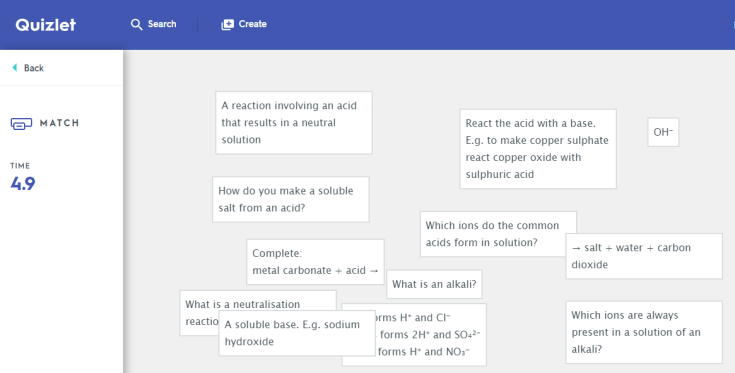 I imagine the purpose behind the game is that students not only have to try and remember the right answer but as they scan the screen they have to also eliminate the wrong answer. Fine. But what attracted Danny was the timing element. After you finish matching the cards together, you get presented with a little leaderboard of all the other students who have done this activity. This really got Danny going. Suddenly, he was in. He whipped out his device, logged on and started playing with gusto. He was fistpumping when he got them right and clenching his jaw when he got them wrong. Across the remaining ten minutes or so he managed to get onto the leaderboard. Not to the top, but at least onto the board.

The me of a few years ago would have been pretty chuffed with that. Here, through the power of competition, a disengaged student had engaged, and engaged in a big way. I would probably have sent an email to his head of year so she could use something positive in conversations with him, might have mentioned it to the assistant head i/c of KS4 to mention in briefing and also might have mentioned it to the Teaching and Learning team.

I’ve heard the “make it competitive” advice many times. The logic goes that boys are competitive, so if they are disengaged, turn your lesson into a competition to engage them. I reckon many others have done too, and a five minute google search found articles like this, this, this, this, this and this, with resources being produced like this (see comments), this and comments on articles like this. I also found a whole load of schools’ teaching and learning policies which made reference to this explicitly but I will refrain from linking to those here.

I think there is a pretty obvious flaw here, which is that…well…it’s a little bit sexist isn’t it? Assuming that an individual likes or dislikes something based on their sex is sexist. It might be that many boys like competition. It might even be that most of them do. But they certainly don’t all like competition. So there’s that. There’s also potential harm if a hyper-competitive teenage boy loses the competition. What will that do to their motivation?

All of the above is true, but my main objection here is broader, and I want to go back to Danny to explain it.

I noticed that Danny was getting into the Quizlet game. Instead of chalking it up as a win for my teaching and helping someone else, I wandered over to him to have a look at what it was that he was actually doing. On the surface, he was indeed matching up the questions with the answers. And he was doing it fast. Really fast. And getting faster. Too fast maybe. In fact he was doing it faster than I could actually read the sentences, which was probably too fast for him to read too. So how was he doing it?

When you look at a flashcard say like this:

If a student matches up the question with the correct answer, it could be because they have read the question, thought about the question, formulated an answer and found the correct answer (or eliminated all the wrong ones). This process would probably be beneficial to learning. But there is another way to match them up, and that’s by their surface details. The answer here has three short lines, starting with formulae, ending with ions, and the word form in-between. If you have got this one right by guessing before, or wrong a bunch of times, you can start to identify the correct answer by these surface details. There are no other cards in the set with the word “forms” appearing like this. Most of the other cards are not built in three short lines. Most of them do not have formulae then ions. Surface details.

So a student could match the question to the answer pretty easily without ever having to actually think about the answer. They could just stick with the surface details and match them up based on those. No thinking required.

So Danny was engaged, but he was engaged in trying to win, not in thinking hard about the material. And he was getting an output he was happy with, despite not learning a damned thing. That 15 minutes of engagement isn’t worth celebrating, because he didn’t learn anything. Potentially even worse than not learning anything, it makes my life as a teacher harder because he probably thought that he had learned something. Next time I wanted to have a conversation with him about his attitude he would just say “but yeah I did loads of work that time we did Quizlet competitions” and before I know it, I am that much further from getting him to engage in the hard, effortful and mentally demanding task that is genuine learning.

You could argue that this is a specific problem with this particular type of competition, and that others wouldn’t have the same pitfalls. But I don’t think that’s true: I think this is a case which illustrates a wider point. When students are involved in a competition, the thing they are focused on is the competition. Their mental energies are dedicated to finding the quickest, easiest and most effortless way of winning the competition. Thinking hard or learning plays second fiddle. The mind has a remarkable capacity to shirk the hard labour of learning, don’t give it another opportunity to do so.

8 thoughts on “Disengaged boys: just make it a competition, right?”